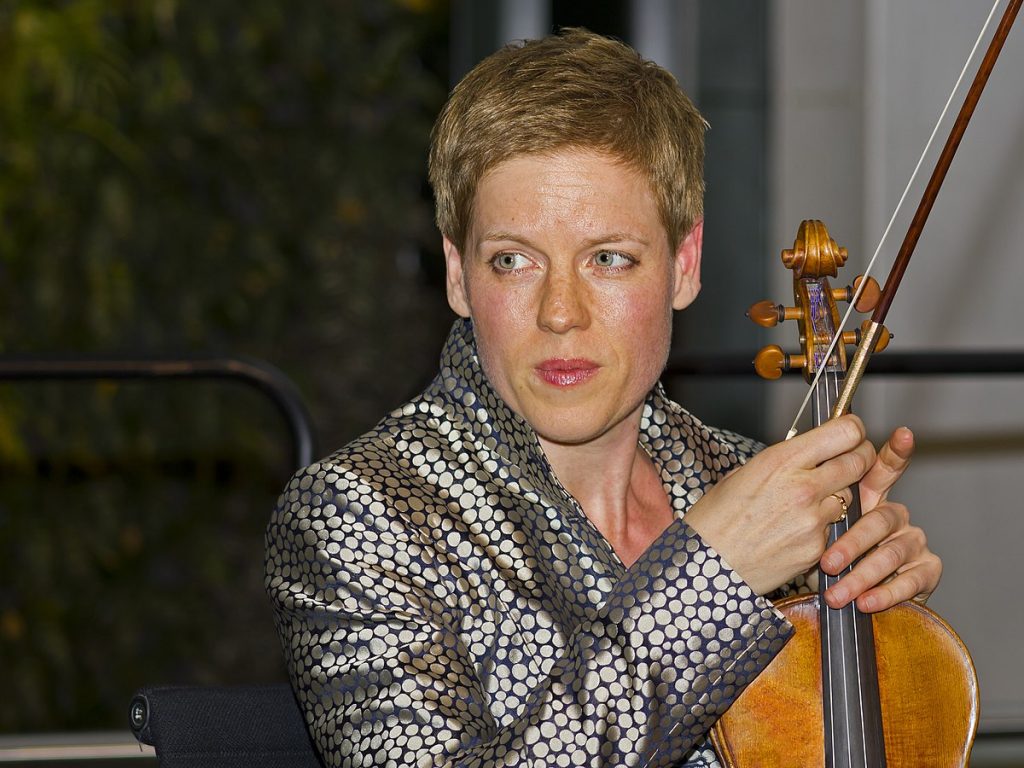 Isabelle Faust (born 1972 in Esslingen, Germany) is a violinist who has won multiple awards.

Faust received her first violin lessons at the age of five.[1] Her father, then a 31 year old secondary school teacher, decided to learn the violin.[1] He took his young daughter along: the father’s talent was not especially stellar, but his infant daughter was able to learn the technical fundamentals of violin playing correctly and at an unusually early age, quickly herself becoming the star pupil. Shortly after that her brother also began to take lessons and when Isabelle was 11 the parents created a family string quartet for which several masterclasses were later organised with some of the leading string players of the time.[1] The early start was, for both the children, the basis for musical careers; Boris Faust has become a viola professional.[1]

In a way, this repertoire is the most difficult … I mean, the huge C major fugue! To enter this kind of music and not only understand it intellectually but also emotionally? It’s sometimes almost strange to go on stage. It feels complete, what you do, the two of you. … I’ve always wondered: did Bach really mean for them to be played in public? I have my doubts.[2]

She trained with Christoph Poppen and Dénes Zsigmondy. After winning the Paganini Competition, and keen to broaden her experience, she moved in 1996 to Paris where she lived for the next nine years.[3] It was in France that her first CD appeared, featuring music by Bartok. She attracted plaudits as an interpreter of Fauré.[3] Faust later commented ruefully that it probably did no harm to her career that, because of her French first name, many French listeners assumed she was French.[3] It was also in France that she met her husband.[3]

In 2004 she was appointed professor of violin at the Berlin University of the Arts. She lives in Berlin and is the mother of a teenage son.[1] Since 1996,[1] she has performed on the “Sleeping Beauty” Stradivarius violin of 1704, on loan from Landesbank Baden-Württemberg.[4] She has also performed with Baroque-style violins and bows.[3]

Faust has performed as guest soloist with most of the world’s major orchestras. In addition to the recordings listed under “Awards and Prizes,” she has recorded works of Ludwig van Beethoven, Antonín Dvořák, Robert Schumann, Franz Schubert, Johannes Brahms (including the Violin Concerto), Alban Berg, Bohuslav Martinů, André Jolivet and others. She is a proponent of new music and has given world premieres of works by, among others, Olivier Messiaen, Werner Egk, and Jörg Widmann.[4] James R. Oestreich from The New York Times counted her recording of Mozart’s violin concertos among the best recordings of 2016.[5]